pac-man and the bailiff of the chiltern hundreds

(1 comment)
June 26, 2007
Yesterday I went wikipediaing on the concept of sinecure after seeing it in a Saki short story. My favorite has to be the British office of "Crown Steward and Bailiff of the Chiltern Hundreds", used as a legal excuse for resigning from Parliament. It's just such a grand English name.

Man... how do I get me one of them sinecures?

Video Gamery of the Moment 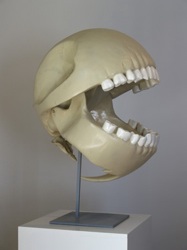 Pac-Man skeleton, conceived by Le Gentil Garçon in collaboration with François Escuilié, palaeontologist, from the comparative observation of human and various predatory animal skulls. More photos on this collection of works, under 2004. (via bb)

Evil B. has taken a strong liking to a new Pac-Man variant, Pac-Man Championship Edition, currently only available as a download on Xbox 360's Live service. Pac Penny Arcade had high praise for it, as did dessgeega. Pac-Man creator Toru Iwatani was on the team for it, and it shows. 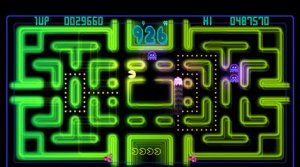 At first blush it looks like a slightly sexed-up version of good old Pac-Man, but widescreen (heh, sort of reminds me of the terrible 2600 version's layout.) There are some cool subtle lighting effects and a good soundtrack. The gameplay is still eating dots, but rather than having to clear a full board, you clear a small set and eat an item, and then more dots appear on the other side of the maze. The action never lets up... even when Pac-Man dies, he re-appears in the same location in a few moments, but the whole game is capped to be a five minute experience.

It didn't really grab me by the hindbrain, but it got Evil B, with his superior old school Pac-Man mojo and desire to tackle specific challenges. (They allow you to chain powerpellets, so that you get incresed multipliers for 8, 12, or 16 ghosts, rather than than just the 4 in the original.) It took me a while to realize that entire halves of the board were being redrawn, not just repopulated with pellets. (Some of the extra modes really throw in some interesting explorations what you can do with a Pac-Man maze, from something like a grid to long straight lines like subway tunnels.)