Tales of the Moment
The other week, a search for information about the 'Whirling Dervish' eventually led me to the figure of Nasruddin, a kind of Zen master of thoughtful pranskterism (albeit from another tradition of faith)

Once a renowned philosopher and moralist was traveling through Nasruddin's village and asked Nasruddin where there was a good place to eat. Nasruddin suggested a place and the scholar, hungry for conversation, invited Mullah Nasruddin to join him. Much obliged, Mullah Nasruddin accompanied the scholar to a nearby restaurant, where they asked the waiter about the special of the day.

"Bring us two," they requested.

A few minutes later, the waiter brought out a large platter with two cooked fish on it, one of which was quite a bit smaller than the other. Without hesitating, Mullah Nasruddin took the larger of the fish and put in on his plate. The scholar, giving Mullah Nasruddin a look of intense disbelief, proceed to tell him that what he did was not only flagrantly selfish, but that it violated the principles of almost every known moral, religious, and ethical system. Mullah Nasruddin listened to the philosopher's extempore lecture patiently, and when he had finally exhausted his resources, Mullah Nasruddin said,

"Well, Sir, what would you have done?"

"I, being a conscientious human, would have taken the smaller fish for myself." said the scholar.

"And here you are," Mullah Nasruddin said, and placed the smaller fish on the gentleman's plate.

Another one I liked was:

Two children found a bag containing twelve marbles. They argued over how to divide the toys and finally went to see the Mulla. When asked to settle their disagreement, the Mulla asked whether the children wanted him to divide the marbles as a human would or as Allah would.

The children replied, "We want it to be fair. Divide the marbles as Allah would."

So, the Mulla counted out the marbles and gave three to one child and nine to the other."

Unfortunately his name doesn't have single spelling when put into English, so you have to type around... these anecdotes came from the Wikibooks page on him. 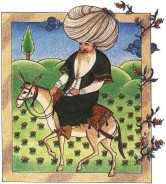