(6 comments)
September 15, 2007
I gave blood this morning (at 8am, after a surprise night of late night socializing when my upstairs neighbors had a shindig for their former housemate who was visiting from Italy) so I'm extra self-righteous today! Also tired.

Random note: separated at birth, yesterday's image of Nasruddin and the Sultan from Aladdin? 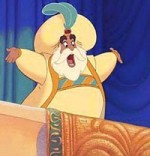 Game of the Moment
Scong is toast-modern [sic] game. "Be the Ball." No really... be the ball. Surprisingly disconcerting. (By the same guy who organized last weekend's game fest.)


[Enemy looms, roars, gets exploded by gunfire]
"Oh man, that was scary. Good thing I had my reflexes up.... I'm a Level 8 Polack."

At the risk of over-explaining, it's a vague reference to online RPGs where you establish the get to upgrade your character's abilities (like reflexes) and achieve various levels of your character's type. Also funny because "polack" sounds a little bit like "warlock".