There are times when I'm worried that the Simpsons' "Ned Flanders" is overwriting memories of my dad. 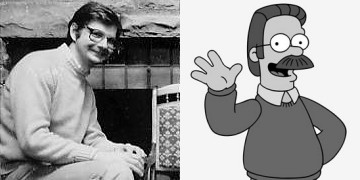 It's mostly a cosmetic issue, glasses and mustaches. (I don't think the Pious Ned / Preacher Dad parallel enters into it so much.) But still. My memories of a hale and hearty dad end after sixth grade, when I'm about twelve or so, and it looks like Ned made his first appearance December 17, 1989, 18-odd years ago. And childhood memories aren't the most solid stuff. I suppose the movies theme of "Flanders being a better dad to Bart than Homer" didn't help.


I hope everyone enjoys the new, resizeable, 'sweeper' program. And if when Vista finally comes out you see that it was renamed 'Microsoft Windows Vista Logic-based Hidden Item Seeking Game 2006 with Skins!', you will know why.

In short, there are parts of the world where landmines are a damn serious issue, and along with a visual makeover, the coders had to work to find a balance between what users were used to and humanistic concerns.