history
(3 comments)
September 24, 2007
A while back there was an xkcd cartoon entitled "Dream Girl" wherein the narrator gets a longitude and latitude and time and date whispered to him in a dream, shows up at that place and time, and...

Well, that's where the geeks who love xkcd came in, and they decided to make something happen. The place was a small park in Cambridge, and the time and date was yesterday, 2:38PM. If you took woodstock, and divided it by burning man, and multiplied it by your high school's AV club, you might have something like the xkcd meetup. Hundreds of folks were there, some in costume, many references to various xkcd cartoons abounded. The place was packed to the rafters, or at least, there was a big stack of people on one of the bits of playground equipment: 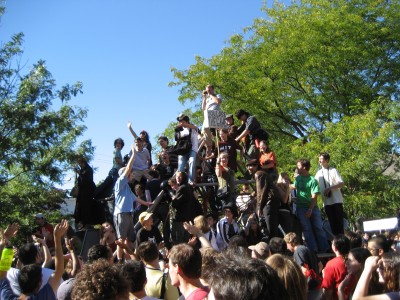 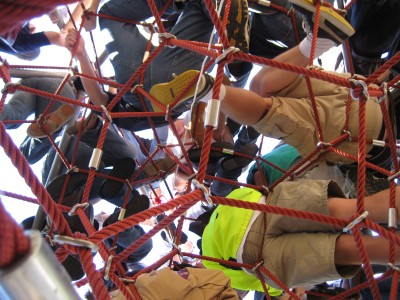 I attended with FoSO and her SO, and she took this photo of FoSOSO being attacked by an injoke velociraptor: 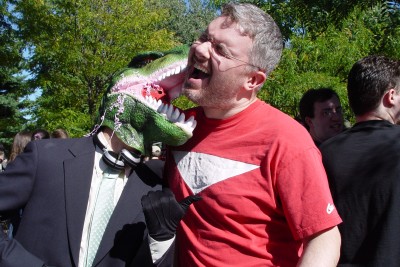 I've tried to explain just how deeply this webcomic resonates with a certain population of geekish folk. Heh, and despite this comic's admonition against slavishly echoing the trappings of a beloved bit of geek culture instead of its spirit, there was a certain amount of pure fandom at the event, like staging a real-life version of a tape-measure-based olympic event. But that's ok. It was a great time and a blast to have been a part of.