japantravel
(4 comments)
March 22, 2008
Travelog of the Moment
So today was another day taken at a leisurely place, sight-seeing-wise, but with plenty of hiking. Josh and I headed out to Hakone, near the base of Fuji, and then went toa traditional Hot Spring.


First off: today was clear enough that you could JUST see Mt. Fuji from the patio... this is gamma-corrected to make it more visible... 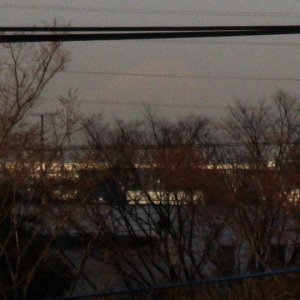 Back inside the apartment, Josh is doing a good job raising Erin: 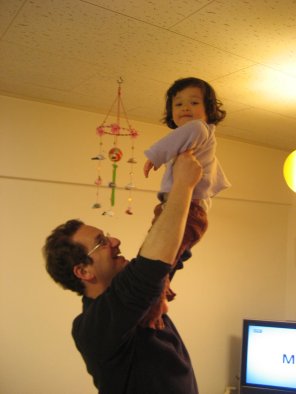 Proof Japan is living 15 minutes into the future: their magnadoodles have TWO colors! AMAZING! 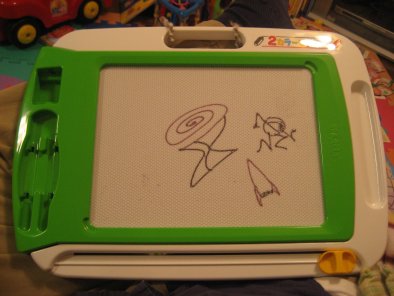 This Disenyfied bus was at Odawara on the way there. 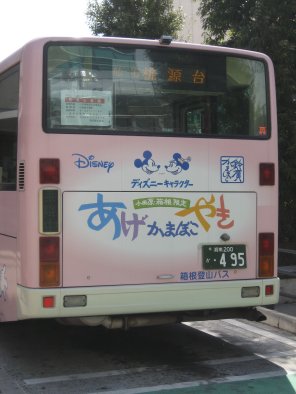 Attractive restaurant by the roadside. 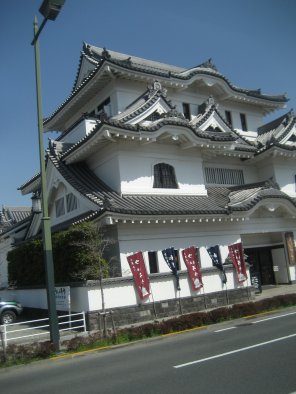 So, none of my pictures from the bus showing the lovely valleys or the constant hairpin turns really came out, so, uh, I give you this one: 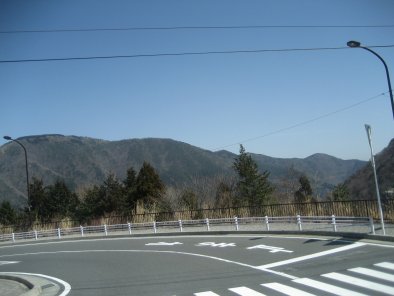 Really dull American-tourist style shot at Hakone-Machi. We got some corn on the cob on a stick there, grilled, basted in soy sauce, wonderful. I wish I had taken a picture of the vendor pounding in the sticks with a mallet, it (sigh) would've made quite a nice shot. 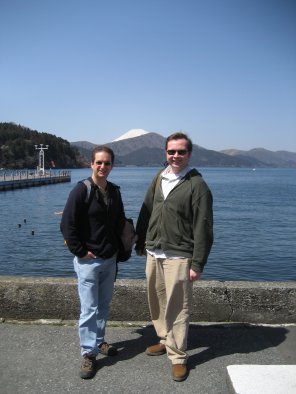 An American-steamer themed ship "Frontier". Note the deer head at the top. Nice! Also, swan and panda boats on the other side of the dock. 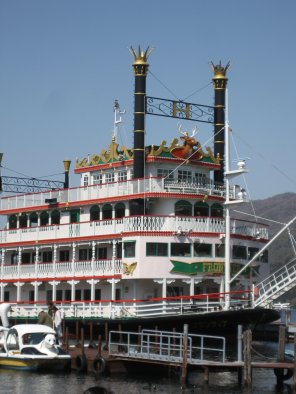 So we started some hiking around the volcanic-crater lake. At one point, we came across this guy. At first we couldn't tell if he was, err, a guy, or some kind of recumbent scarecrow or something, and then we were suddenly thinking "bizarre horror film tableau" and hurried on our way. 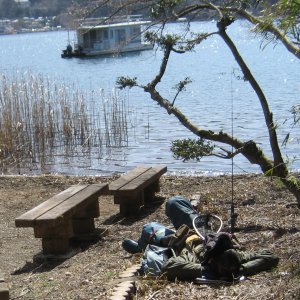 There was a tree in the path. 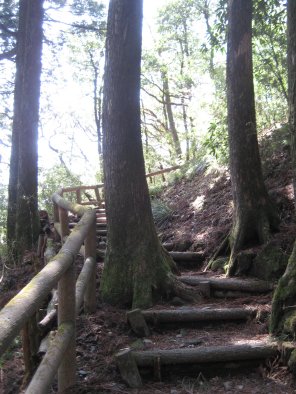 The path was rather steep. 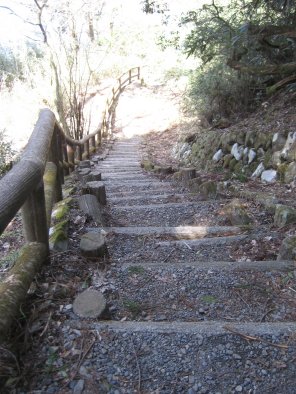 My attempt at a typical Japanese tourist photo. 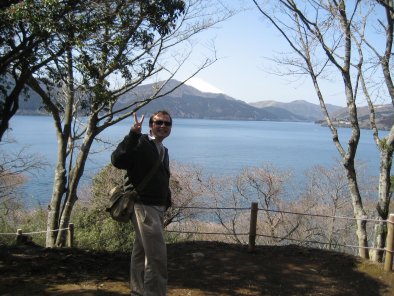 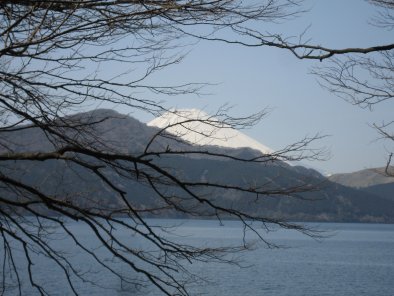 Nice village view with boats, probably needs to be expanded. 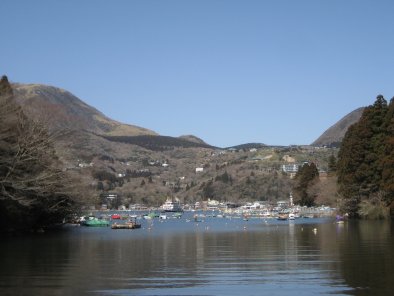 Fuji and a Shinto Tori Gate. 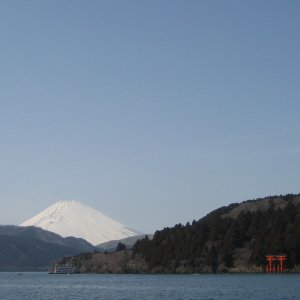 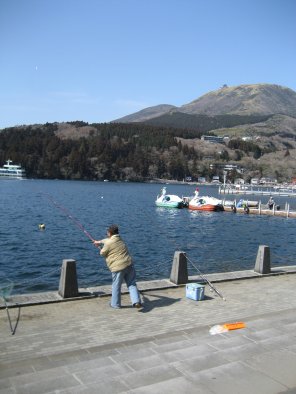 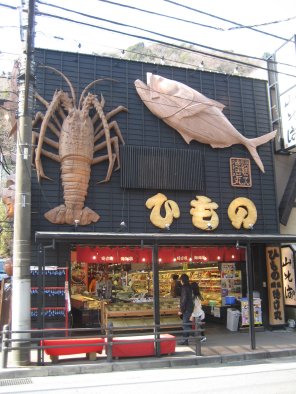 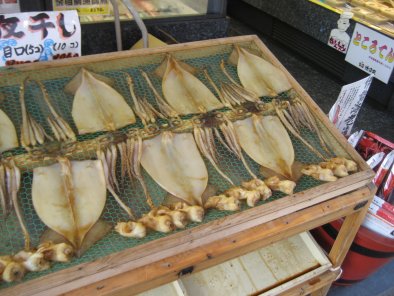 Badly reflective shot of a neat stylized version of "hear no evil, speak no evil, see no evil." Missing monkey for "so just do it!" 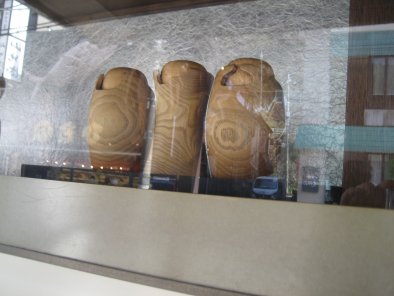 So, weirdly washed-out view of the Onsen, traditional hot springs spa. I saw many naked Japanese men. I like how they (and I, when in Rome etc) carried arond small white towels in front of their thingies, and then put those same white towels on their heads when relaxing in the hot water. 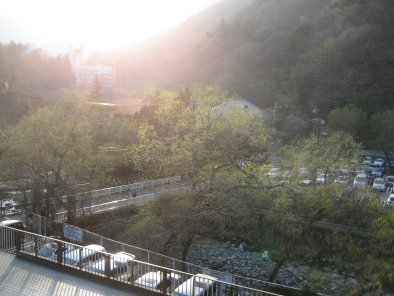 So, on the walk back to Moto-Hakone (village with the fishmonger and stylized monkeys) I saw this protective fence, stopping rocks from falling on innocent passerbys such as me and Josh. At one point the chain link had a hole cut in it for chainlink to pass through but I had to wonder, how did they get the tree through the hole? Or the rest of the fence around the tree? The tree branches out quite a bit. Kind of a Ship-in-Bottle situation. 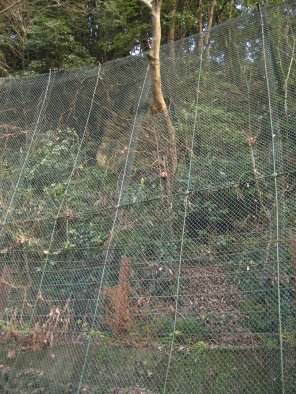 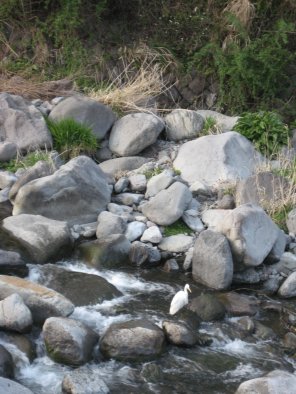 Josh does not think this is a very pretty river. 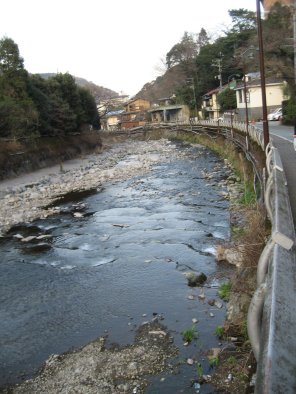 Finally, back in Shim-Matsudo. I like this logo on the side of a vending machine. Tommy Lee Jones used to advertise this stuff. 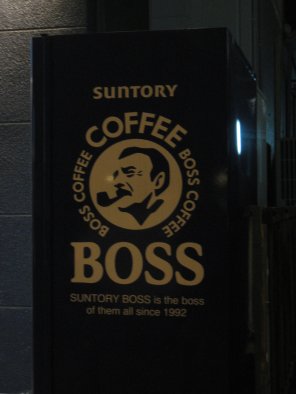 Finally, ending where we began, sign for the supermarket below Josh and Tomomi's apartment. I was more interested in it when he mentioned it was family owned, only two of 'em around Japan. 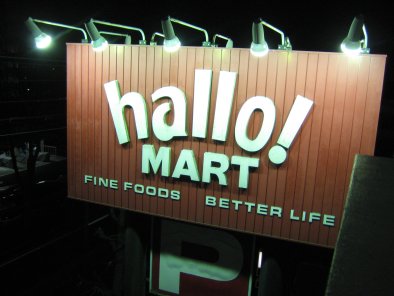