(3 comments)
January 10, 2009
For some reason my recent series of Twitters about ads from old LOOK magazines is making me muse about a change of format for this site. As always, I know it's not the kind of issue other people are on the edge of their seats about, but if anyone has an opinion (other than an unadorned "stopping blogging would be good for you") I wouldn't mind hearing it.

What I'm realizing I like about Twitter is that I've made it a return to the old days of keeping a quote journal on my Palm, a certain spontaneity and joy of discovery... quotes and thoughts being added as soon as they're unearthed, rather than being collected into the presentation of a kisrael.com entry. It took having a smartphone with an unlimited data plan to bring that back, after I started to prefer making kisrael.com public, rather than accumulating stuff semi-privately.

There are some weaknesses to the Twitter angle, though; the 140 character limit is fun to work in at times, but it can also be a bit stifling. The "last 5 entries sidebar" is a bit arbitrary, and outside of my site's own archive and comment system. It isn't always a great match for the site's day-centric focus.

I think I do still enjoy having a devotion to "at least one interesting thing to look at a day", even if often it's just a found Youtube bit or something recycled from Boingboing. I could almost see an idiosyncratic, bimodal daily layout, the left having a "longer form" entry (pretty much what kisrael.com is now), the right having the twitter-ish whatever I encounter or think about that day.

Any thoughts? I'm not sure if a switch like this would make me drop Twitter out of the picture altogether or not. I suppose a few people find it easier to follow me there. In theory I could mirror one into the other.

Heh. If I had this side-by-side, longform/shortform layout, maybe I should add a third column to embed comments right on the side? That might be a bit much, though. (Especially if I don't get the spamming taken care of.) Maybe a hidden column? 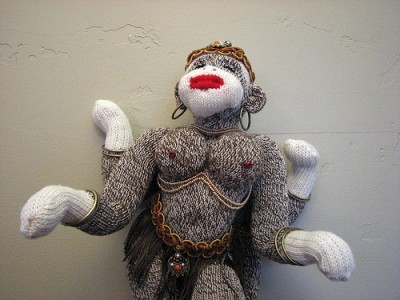 --There is something primeval-ly right about this sock monkey sarasvati. From this flikr account that has an equally compelling sockmoneky Buddha, Veus de Milo, and Venus de Willendorf

"Perpetual devotion to what a man calls his business, is only to be sustained by perpetual neglect of many other things."

Unfortunately, I think you could substitute many things for "business" and still be correct... work-life-family-friends-hobby balance is really hard to achieve. "Everything happens for a reason" does not specify a "good" reason. For instance, not "to annoy the living piss right out of you." Watching JZ explore the wasteland of DC in Fallout 3... he's so used to this kind of game he doesn't see how weird it is to loot a head. Bowling trash talk gone wrong: "Is there a horse that you rode in on? I wish to make love to it. Wait, that's not right" Ha, I just looked up the lyrics to the Kinks' "Lola". I had no idea! That stuff is funnier than the Weird Al version "Yoda", by a lot. The oddly comforting sound of a bit of loose change skittering in the drier... Google Groups has this thing where you can search for but not reply to an old thread. Which is ok, but I just "reply to author"d by mistake.