the bellcurve of economic suck

ramble
April 19, 2020
Dan Ariely on procrastination - he's been through a lot of harsh stuff, and he's an advocate for "reward substitution", giving yourself immediate rewards when having to toil at a project with a payoff that is far-off or uncertain.

Of course it takes a lot of discipline to do that; you're making semi-arbitrary pairings, rewards that don't directly come from the effort, and you have to be in control enough to not just gobble the reward without the work.

I am somewhere in the middle of the bellcurve of economic suck - a curve that has slid suckwards for nearly everyone. I'm between the folks who really feel the wolf at the door on one end, where rent and bills are absolutely looming on one side, and maybe with work experience that only makes sense in social times - and my peers who are muddling through, adapting to work from home but with something like stability, collaborating with people they know from the before times. Hopefully closer to the latter group, but we'll see.

(And that's the bellcurve for people who have stayed healthy, or muddled through a mild or medium case- but with 33K deaths in the US alone, how many of those people wish they had the luxury of fretting about the economics of it.)

I miss the goal structure of the workday - the fuzziness between worklife and homelife still got a little weird, but I could knock off at the end of a day and then think about what else I wanted to do. And I can still do that a bit, but it's always under the spectre of how maybe by not grinding more, I'm going to make my life worse for myself and loved ones.

And in the shadow of the religiosity I brewed for myself as a kid, that guilt feels a ton like a great example of the consequences of sin; in this case the sin of not going at 100% all day long, all weekend long. Trying to go flat out all the time is a bad idea for a number of reasons - among them, a denial that some large percentage of the final outcome will be the result of luck or good or bad poor decisions I made "in the before times"

Tangent: I found this poster on tumblr: 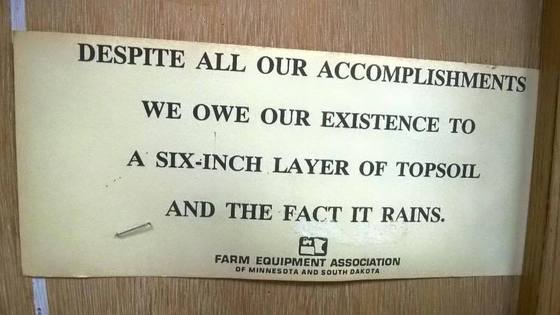 As one commentator said - "Farm equipment association going hard w the truisms". But also a reminder that things are bigger than we are, and our own efforts are necessary but not guaranteed sufficient to the outcomes we most want.

The work/relax decisions remind me of why I'm not much of an entrepreneur - unless you're wildly successful at making bank, able to turn on the cash spigot whenever you need it, life is always going to feel full of these tradeoffs of work and play. I guess good entrepreneurs enjoy the hustle, the chance to make the big win and know they did it themselves. (It's akin to why I don't have to worry about becoming a gambling addict, the rush of the win doesn't feel better to me than the grind of the losing.)

I'm (as always) a bit full of myself but I feel like I would be a productive, creating person even without having to find channels that still pay the bills. (Which is why I still permit these idle daydreams of some unsuspected rich benefactor swooping in and granting me early semi-retirement, freeing me to make porchfest websites and band stuff and teaching people to program and make virtual toys and also more comics about coping with death, and maybe even coping with the stuff that comes along before...)

Im sorry if I am wrong. My feeling and this is just my opinion : is if people are losing their businesses and homes after only a few weeks then were they actually thriving in the first place. If they were so strong they should be able to survive. Just saying.

I think it's a great point on the fragility of our economic lives. As much as I question his wisdom on the economy and pretty much everything else, Trump was keeping the slope he inherited from the Obama-era recovery going - but there's a superficiality to so much of that. There are so many problems we haven't worked out - how to make a society that blends and balances capitalism's "Freedom To" and democratic-socialism's "Freedom From" so that we try to iron out some of the more egregious instances of bad fortune (being born in the wrong neighborhood, to poor parents, or coping with being in/of a subculture that is discriminated against) while keeping the incentives alive, the connection between hard, smart work and better results intact.

The risk of getting sick from handling mail or packages is extremely low and, at this point, only theoretical. There are no documented cases of someone getting sick from opening a package or reading a newspaper.

But that doesn't mean you shouldn't take precautions. After handling mail or packages or reading the newspaper, dispose of the packaging and wash your hands. If you still feel especially anxious about it, take guidance from the New England Journal study and just let mail and packages sit for 24 hours before handling them.

TL:DR; far and away the biggest threats seem to be proximity to infected folks (whether they are showing symptoms or not)

Also, clothing isn't so likely to carry contamination away, the way air flows around us and not into us means that most particles are ending up on the floors etc. Facetimed with Cora. We co-played for some of it, her with her kinetic sand on her end and me with my Lego on mine... wasn't super interactive but probably pretty par for the course for two only children :-D 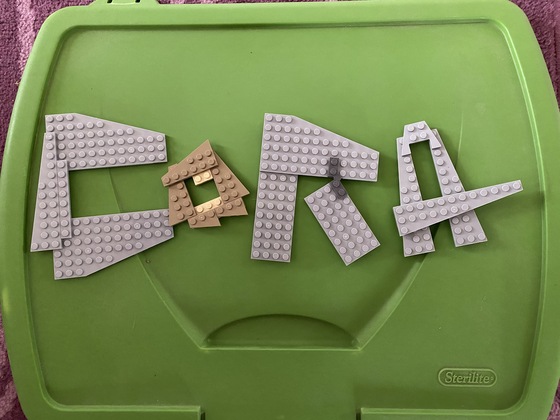 Working the message of embracing challenges, or as she put it's "pushing herself" - going for multiple layers with sand, or a snake complete with head and hissing tail etc.

Of course, having watched the end of "Lego Masters" - humbling. Though it makes me think it must be a very different experience playing with a vast supply of well-sorted Lego - for most kids, it's a resource management game (actually reading the interviews with some of the contestants, you could notice that some had much more Lego Privilege than others...)