wart of the worlds

Going on vacation can suck sometimes. It's not really the vacation, itself, that sucks but the catching up with everyday life afterward that sucks.
--Mr. Lex
(6 comments)
(8 comments)
July 6, 2005
Yikes, did I get sunburned on Saturday. At the risk of Too Much Information, sunburned to the extent of "hey, aren't nipples supposed to be a different color than the surrounding skin?" Note to my future self: whenever you start noticing any parallels from that one trip to Florida high school freshman year, when you burnt yourself to a crisp on the last day because it had been overcast the rest of the week, with backs-of-knees burnt so much that you couldn't fully stretch your legs, it's time to not be getting so much sun. The kind of burn your heading for is not the one they mean when they suggest sun exposure is beneficial for heart reasons and even against cancer.

Movie Review of the Moment
Saw the new "War of the Worlds" this weekend. Gotta say, didn't live up to the reviews for it. I mean, I know it's not going to be the "hard scifi" I might've been wishing for, a real "what if aliens really did invade." At times it almost felt like "the aliens are out to get Tom Cruise" (not that I'd blame 'em, but still.)

<SPOILERS type="minor" surprise-revealing="false">There were just too many "why"s...Why would the aliens bury their war machines and let them lie dormant for centuries and centuries? And buried in urban, presumably well-excavated areas to boot...why didn't we notice 'em? Why was that one camcorder working when all the electronics were fried? (Just to look cool, I know.) Why were all stalled cars conveniently pushed by the wayside so Tom Cruise never had to take it offroad? Why did a jumbo-jet just happen to crash at Tom Cruise's Ex's house? Why would a newscrew be scavaging food, and why would they think a plane wreck was such a great place to scavange food in a residential neighborhood? Why were people all over Tom Cruise's minivan, when the ferry seemed full of other still-working vehicles? The flaming train, sure, maybe it would keep running, but the array of flaming humvees? (Another 'just to look cool' I guess, like the train wasn't enough) What was so special about that basement, anyway, other than the fact Tom Cruise was hunkering down in it?

A straight, slightly steampunk "alternate history" port of the original story would have been so much cooler. The book (I just read the e-text) was fairly realistic, actually, almost all you have to grant is the idea of aliens from Mars. The human weapons are outmatched with no need of an invulnerability shield, and the aliens learn and counter our tactics. (Actually, you could play some cool "What Ifs" putting up original War of the Worlds tech against our modern military...might make a better battle than "Independence Day" which agains relies on force fields. It has been noted that ID4 was, in fact, a retelling of the original War of the Worlds, right down to the "virus" that takes 'em out.)</SPOILERS>

So I know I'm not reviewing this film in terms of what Spielberg was aiming for, but still...sometimes his drive to parallel real-life horrors like WTC just got in the way of the potential of this story. The trailer I saw, with a neighborhood being woken up by terrible, unknown sounds and lights in the far distance, was much cooler than the movie itself.

Photoshop of the Moment 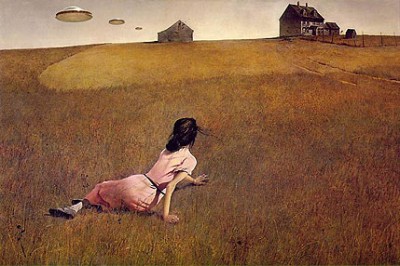 --"Christina's War of the Worlds", from betaland. I was googling for some "War of the Worlds" ships to make a "Have You Seen Me?" poster for the previous ramble, but this seemed much better anyway.