THE END. EVERYONE BOWS, ETC.

jobhistory
(7 comments)
January 26, 2007
So I received a verbal offer of a new job today. I had a bit of angst about it. FoSO asked, in effect "good, a new job offer, so what's the problem?"... but of course I'll always find something to worry about. (Could I have a physical addiction to worry? I wonder.)

The problem as of this morning was
A. the way I hadn't shopped around, that this was the first company I had interviewed with or even looked at.
B. it seemed like a cool role, though wasn't this kind of ideal I had thought of as a small series of "small tight projects" (not that I'm certain if it's a realistic ideal)
C. I'm enjoying my slackerly life

I dealt with A. by talking with Scott, the guy who "found" the place, and says we would have taken the offer but didn't like the commute. He pointed out that while I was taking it easy post-layoff, he was pretty much flat out in his search, and actually this was one of the best things he found, and also based on his knowledge of me, it seemed like a good match. Plus yesterday for grins I checked craigslist, and while a scan of a few days of craigslist postings doth not a jobsearch make, I didn't get the feeling that there was a trove of untapped supercool, horse of a different color opportunities there.

I dealt with B. in talking with Tim, the guy who was kind of my mentor at Refresh; he encouraged me to think through what I wanted to do, and I think this job could be a great base for a more-UI centric approach to my career that I'd like to get to

With C. I negotiated a bit, and won't have to start for 4 weeks, so while it doesn't live up to every dream I might have of a period of leisure (esp if I do some work for my last company) It ain't bad, and if I apply myself I should have time for a fair number of the projects, self-improvement and otherwise, I'd like to get done, and maybe even some travel.

The job is downtown, Back Bay... there was a time, post-9/11, when that would have made me nervous, but I think I'm fine with it, it's just my usual need to worry kicking in. Based on the non-rushhour interviews, it's maybe an hour each way, but an hour of public transportation beats half an hour of driving. I can take a bus to the T stop, or walk, though it's a hike; I might look to buy a beater bike.

Script of the Moment


It was at this time that the writer of this play, realizing that he couldn't finish Act I without a lot of lasers, blood and guts, and other things that make people go out and pay to see "Star Wars," wisely decided to have me come out and say that there was actually no laser battle, and that the officers accepted a small bribe, made up with Zim and Erik, and had a good, hot meal, and everyone thought that they were getting a pretty good deal. However, the Star Cops left before our stars could ask them how to fly the ship. We now return, about two hours later.

Just to wrap up "Star Hop", I wanted to throw in the cast list: (I figure there's a small chance one of these Monticello / Cleveland Heights people will Google their own names and find this:)
STAR HOP
by Logan Israel


Finally as threatened, the ultimate photo of me: 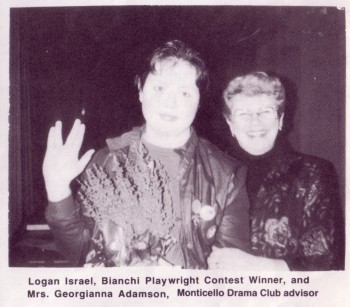 It has it all... stage make-up, general blurpiness, outstandingly hair styling with mousse that has given up the fight, holding flowers, flashing the Vulcan salute, and a shiny jacket with pins, a too-cool-to-smile, not-cool-enough-to-scowl expression. As published in my school's paper "The Monty Times", though I also have the color original.

So the version of the play I've been showing this week was at my school, on a twin bill with "Best Friends and Other Strangers" by Dionne Custer and Meredith Howard. I played the father role in that, and had a somewhat bigger part than in my own play.

Final note, I noticed the Bianchi festival put me at the top of the bill that year, with most of the other plays being in order by grade. Guess they wanted to start with a laugh, which would make it a bit of a compliment.