photos
(1 comment)
May 10, 2008
Wow, twice in a row now Pap has let the Red Sox down in the 9th. (Though the Sox are keeping up their proud tradition of leaving legends of men on base.) Maybe I'm jinxing him by tuning on the radio in the eighth as I get ready to turn in!

Apologies for the crudeness of today's title. You know, it's funny how every once in a while I still think "Wow, I can't believe the Pats won every game and then lost the Super Bowl." (Makes me think of that "BeliCHOKE!" headline idea I had, along with a thousand other football fans.)

I'm not sure if this photo catches it, but the Boston sky was so thick and heavy a few weeks ago... 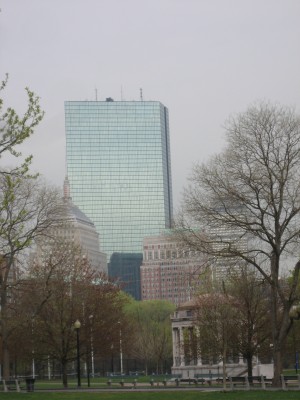 I think I've written about this before, but I love the optical illusion of the building next to where I work, how they've cranked up the railing to super human proportions, presumably for the visual effect of it from ground level. So there's a guy here poking around the AC unit, and I think it's funny how small he looks... 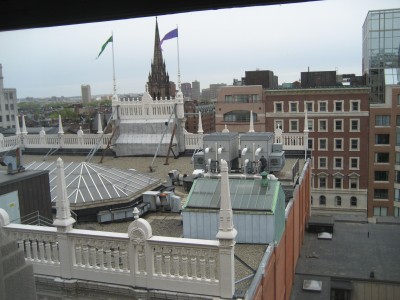 The Disney-Cinderella's-Castle-esque look of the colored flags are a nice touch.

The other week JZ was "helping" me pack by playing with legos (I kid, he was a big help) 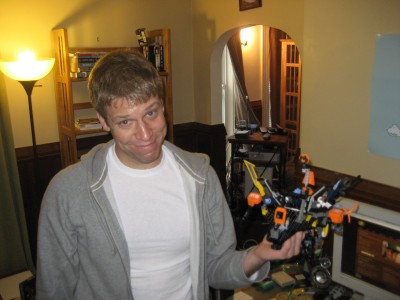 Here's his creation, mostly a kitbash of some pre-designed sets I had barely dismantled. I christened it "Captain Cooly McAwesome of the Starship HELL YEAH". 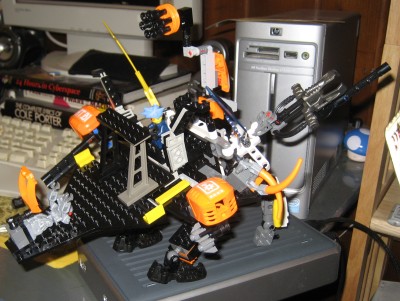 JZ also went with me as the New England Classic Gamers finally got around to having another trademeet, and I got an old Game & Watch game "Bomb Sweeper" (a puzzle game, no relation to Mine Sweeper... here's an excellent Java model of it) I had to buy batteries (at like twice the cost of the game) and my picture to remind me of what battery to buy came out artsier than I expected: 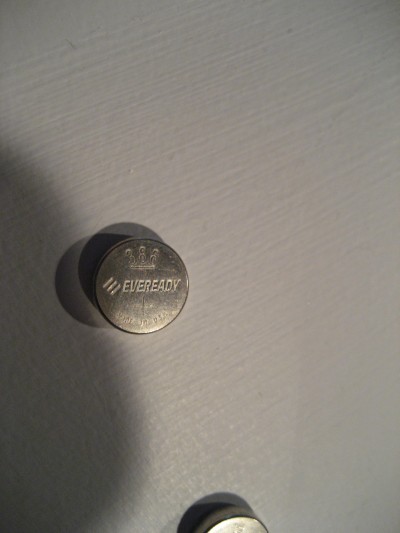 Finally, at Ken Schwaber's ScrumMaster training, he brought out this particular cartoon of the story of the Chicken and the Pig. ("Hey Pig, I was thinking we should open a restaurant" "I don't know. What would we call it?" "How about 'Ham and Eggs'?" "No thanks. I'd be committed, but you'd only be involved!") Its meant to be a metaphor for software development, that the developers are the ones with their bacon on the line, and they get to point this out to the "chickens" of the rest of the company.

I've never liked this joke. For one things, jokes are best when they're funny. Secondly, it doesn't seem like that great of a metaphor. I expressed some of my unease with the cartoon by rewriting and redrawing the third panel: 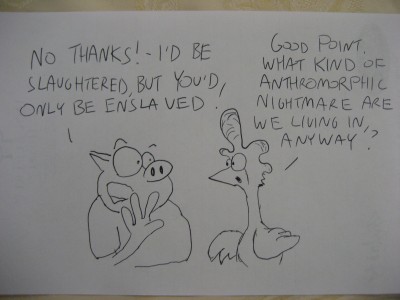 Ken seemed to like it and asked if he could keep it.