computers i have known

historylaptoptech
(1 comment)
January 19, 2010
This is one of those entries I always feel the need to apologize for... there's nothing geekier and sadder than a nerd listing out hardware he has or had. But still, I realize I'm on the verge of forgetting some of this, and my future self might be interested, especially now as I might switching from a desktop to a laptop as my "main machine", the one that has the "official" copy of C:\data\ ...

Atari 800XL, ~1984-1988
Around the time of the Great Crash, some dealers were liquidating Atari stuff to give to the Salvation Army so I got this system. You know, this was a great computer for a kid geek to start with - it played games about as well as a C=64, but its BASIC had a lot more zip to it, in terms of graphics and sounds. (Only the Apple II seemed to be a better hacker maker.) Plus I loved its version of Logo...
Commodore 64, ~1988-1991
But this is the computer I really wanted, mostly because more games seemed to be made for it (at least it had more piracy going on at school.) This was a terrific Christmas hand-me-down for my uncle when he switched to PCs.
"Monk", ~1991-1994
My first PC, senior year of high school. I begged my mom for it, justified by college, but really I saw Wing Commander in a magazine and NEEDED to play it. "Lworks", this odd thing by Lotus, was my main word processor on it. Its design was a cool kind of "pizza box" that fit right under the monitor.
"Monk 2", ~1994-1997
A 486 in a giant tower and with a giant monitor. Mostly I wanted it for games... and it was great for that, at least 'til the dorms got networked and freshmen started kicking my butt with their much faster Pentiums.
"Monk 3", ~1997-1999
An ok "PCs for Everyone"-built Machine. I think Dylan figured out his sexuality thanks to the availability of sites and porn via modem when he was subletting from me.
"Monk 4", ~1999-2002
Toshiba desktop, another "pizzabox" style - man, I forgot this machine was problematic, its USB was never quite up to snuff. Foisted it off on some cousins.
"Monk 5", ~2002-2006
HP tower. I still like the stickers I put on this one.
"Monk 6", ~2006-2009
An HP microtower. Cute, not a bad machine
"Monk 7", ~2009-now
Pretty much a direct replacement for Monk 6. Both are two small for their own good... Monk 7 every once in a while starts shutting itself off for no reason, and I fix it by dropping it a few inches.

2017 Update: I guess once I started with "Brute" as a Desktop replacement (see below) and then switched to Macs, I gave up having fixed Desktops

Tandy 1100FD, ~1992-1995
Oh man, I loved this. No hard drive, gameboy-type (but somewhat larger) CGA 4-shades-of-spinach screen, but a good keyboard and a hard-wired text editor that was ready to go in seconds. I think this was $500-ish when I persuaded my mom to help me get it for college- I was an early adopter for taking notes in class with this thing, and it did its job well.
"Matic", ~1995-1997
Amazing slim laptop made my Mitac, 486- greyscale screen - ran Windows 3.1 like a champ. I shelled out for it (in the $800-1200 range) because I needed to take down diagrams in class- ASCII art on the Tandy wasn't always cutting it. With its trakball I doodled the logo they adapted for the Tufts dorm wiring project. After college I gave it to my mom but stupidly slapped Windows 95 on it, making it well-nigh useless. 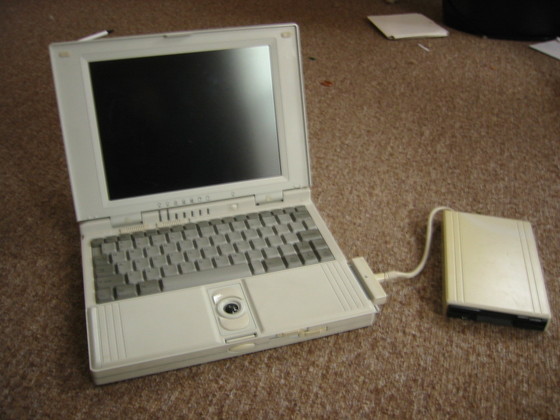 Gateway 2000 Handbook, ~1996-2000
I didn't use this much, but for $50 I bought this adorable DOS machine off of Paul - it's kind of the form factor I had wished the Tandy had had. Never thoguht of a use for it though- even though it had a harddrive, I didn't have a way of getting stuff off and on it except maybe a serial cable.
"Eggdevil", ~2004-2005
A great little iBook I got an ebay. It kind of taught me that Mac didn't really work for me, alas. I gave it to Peterman when he helped me get the house ready for sale. The name comes from its egg-color and a devil BSD sticker he put on it. I think I got it back from him at some point, but then it got soda spilled in it.
"Sliver",~2004-...
I had have this Averatec laptop for like 6 years at least - nice moderate size. The power adapter on it got too wonky, despite my Uncle Bill taking a soldering iron to it... pretty good for DVDs in bed. 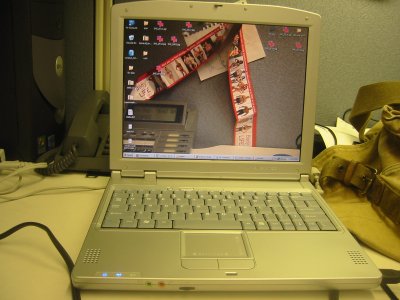 "Frank",~2006-...
Ugh, this was meant to be a straight on replacement for Eggdevil but I cheaped it on Ebay, and got this stinky-ish Franenstein machine (the lid seems to be of a different material than the bottom). I keep getting Macs 'cause I want to get into Garageband music making software but never get around to it. I think this guy doesn't have enough memory to be actually useful, so it sits on a shelf.
Fujitsu Lifebook (x2), 2006-, 2009-
I can't say enough good things about this laptop! Touch screen, netbook-size before "netbook" was a concept, durable... been with me to Japan and Portugal. I actually have two of these now, I bought a spare when I realize I could get a refurbished backup for $250 on Ebay. (A Newegg receipt makes me think the original cost me $1324 in 2006)
OLPC laptop, 2007-...
More of a toy, at least the way I use it, a One Laptop Per Child laptop I bought for the heck (and charity of it)
"24", 2008-2009
Bought a kind of cheap but big Acer laptop as an experiment (I think this was just before laptop prices started getting dragged down.) "24" is named after the Jeff Gordon sticker I had JZ get for me at NASCAR. Currently on loan, not holding up all that well.
"Boilermaker", 2009-2010
A heavy duty Macbook Pro I bought off of JZ... served me well by running WinXP under VMware as a developer machine. Currently on long term loan to a cousin. Named after a redneck car detail I got at the Topsfield fair for it.
"Yoooouk!", 2008-2012(?)
Oh boy. This is one of those HP touch ones that I had, and kind of have, high hopes for, but it's never felt 100% reliable and robust- had a bit of virus issue, the power plug seems a bit wonky like it was for "Sliver"... named for a "Yoooouk!" bumper sticker it wears that I got at a Red Sox game.
"Brute", 2010-2013ish
My new purchase, the Toshiba P505, a 18.4 behemoth of a machine, meant to let my "main machine" be a laptop, and make living at Amber's make more sense - so it could mark the end of the "Monk" era

"The Axehead", 2010-2013
My first at home switch to the Mac side, that weird 11" Macbook Air form factor... diminutive but great and portable, not quite enough HD/SSD space. 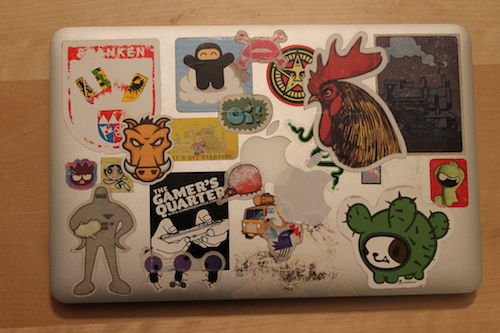 IBM Touch Thinkpad, 2011-2012ish
Got this for cheap at Micro Center, and for a while put it with a trackball as a dedicated Centipede MAME machine for my girlfriend
"My Macbook Air", 2013-2020
My work machine that I bought off them when I left the company. Still going pretty strong.
"The MonkBook Air", 2020-2021
Apple did a decent update to their venerable classic. This one saw me through the main year of COVID, easier to swap workspaces with my work Macbook Pros (see this entry for some reveling in stickers as I got my new MacBook Air...)
SmackBook Pro, 2021-
Time to get back to a big screen (not quite as grand as Brute was but still) and the new chip... a little calmer with the stickers.

TI flat thing, 1995-1997
Man, I wish I could find some record of this! It was a cool, flat PDA I bought off someone at Tufts - rubberized grey and maroon, it had holes so it could be placed in a 3 ring binder. I first started jotting down quotes in this thing, but I couldn't connect it to anything. (UPDATE: It was the Texas Instruments PS-9500 TimeRunner )
Palm Pro,1997-1999
Its hard to explain how cool this was. When I first heard about graffiti, and humans having to learn a new way to write, I was skeptical, but man, having a powerful notebook/calendar/todo in my pocket was just astounding.
Palm V,1999-2001
Like the Pro, but slim and trim and awesome.
Rexx, 2001
Heh, the laptop PCMCIA card-sized wonder was a bit too limited for recording notes and quotes, otherwise mighta been an ok PDA.
Palm IIIc, 2001-2003
Like the Pro but color... I kind of liked the minimalism of b+w but the text was so much more readable.
Sony Clié SJ22, 2003-2006
A nice little machine running PalmOS but with a double resolution screen. Nice soft flip case it came with.
PocketPC phone, 2006-2007
Oh dear. What a piece of crap this was. The slide out keyboard was nice but the OS was junk, despite kind of almost delivering on the promise of "an app where I can both doodle and write text" - in other words, why I bought a trackball laptop in 1995. It didn't just "butt-dial", it "sitting on the shelf by itself" dialed.
Palm Z22, 2007
I had forgotten about how much I loved this last gasp of Palm PDAs - it was so comfortable to hold, and cheap and cheerful. It deserved a better fate than to be drowned while kayaking.
iPhone, 2007-2008
I didn't mean to be an early adopter of this, but I was, and haven't regretted it. Even when it didn't have things I took for granted on the Palm, like "add programs" and "copy and paste", from its home screen on down this felt like the Palm, plus music, plus a great browser.
iPhone 3G, 2008-2010
What can I say - I needed more than 8 Gb for the music I wanted with me.
iPhone ??? 2010-from here on in?
I'm saying this has now reach the commodity stage. Great phone, a replacement for the Power Shot camera I started toting in 2001 or so, smooth transfer from one homescreen to another... no longer worth keeping track of

I remember how annoyed and nervous I was at the old "PDAs are dead, here comes smartphones", before I realized how PDA-ish the smartphones would be. Heck, an iPod touch is a tremendous PDA, and that's just an iPhone minus the phone and camera... Is driving a car out of where it's stuck in the slush and slow Taoist? You have to follow the natural path of where the car wants to go...

Everyone who had a talent for it lived happily ever after

Rex is going to the vets to get snipped today. I feel a little bad but I guess it's just part of the deal cats and humans made on the species level. MA FOLKS- don't vote for Republican filibuster today... we don't need a tyranny of the minority party!

Did you know that the Germans call duct tape "Panzertape"? Germans have cooler names for everything.

Really thinking I should have paid more attention to Processing.js; having access to all javascript in a browser-based sketch is great.

How are you all enjoying your new lives as biological robots? If the process went smoothly you should not have felt a thing.