arttechhistory
October 4, 2018
Apple designers get a serious case of show-offness when it comes to make their phones as thin as possible, even at the cost of battery life and durability. One of the silver linings is that phones-in-cases become much less bulky than they were in the iPhone 5 era or before - the case just brings it up to being a typical size oldschool phone, as if the case were part of it - and so now everyone gets to pick how their phone looks and we don't look quite as much like the Apple drones so many of us Boston techies are.

I like getting custom-made ones with art by Jame Harvey - the indie artist who has done work fo DC, as well as my own comic on mortality. Here they are:

And here's the latest (first one where I didn't technically commission the art, though I helped fund the Kickstarter... 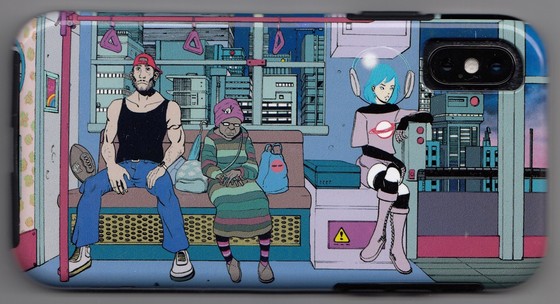 Of course, lock screens can be pretty hip too... the new one on the right is a zoom in of a poster I ordered from him when he was doing freelance commissions:

I also made a wallet or two.

The cases were mostly ordered from zazzle. For what it's worth, two of those cases were wooden, which I wouldn't recommend if you need it to last more than a year.