doodle
A while back Winnie Gong sketched me as the mythical Unicorn full-stack developer...

doodle
I like everything about Dinosaur Comics' take on airplanes. BWAHAHA, Republican politics have a LOT of trouble with the phrase "I support Donald Trump". I've been fooling around with some test panels for a possible remake of Young Astronauts in Love. I think the shading works pretty well... maybe need to think about this to deal with shadows... 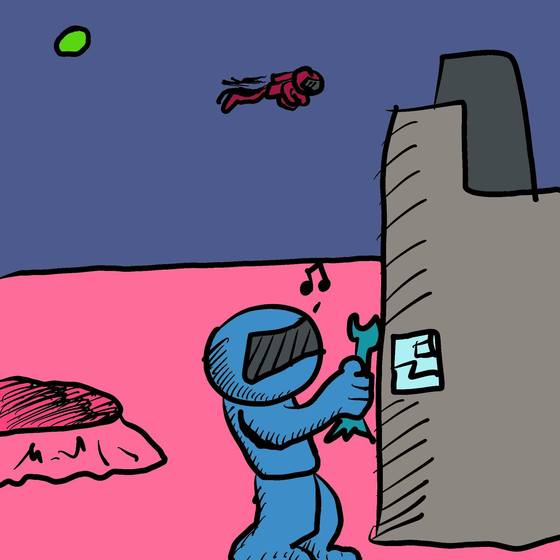 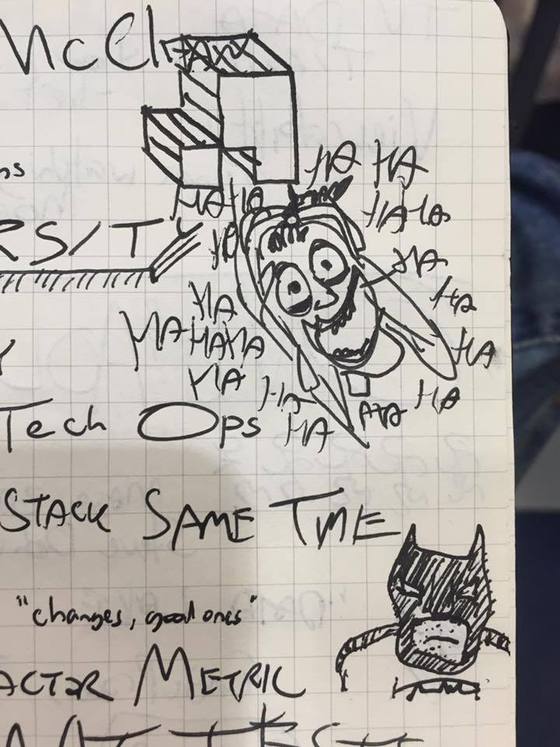 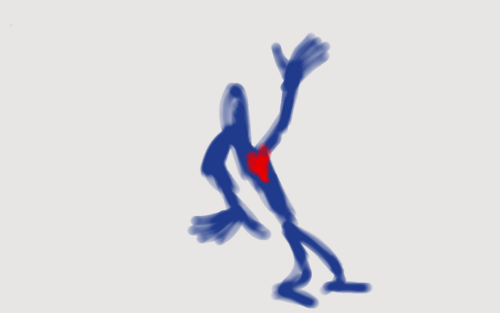 What is nothing? Macbeth answered this question with admirable concinnity: "Nothing is, but what is not." My dictionary puts it somewhat more paradoxically-- "nothing (n.) : a thing that does not exist." Although Parmenides, the ancient Eleatic sage, declared that it was impossible to speak of what is not-- thereby violating his own precept-- the plain man knows better. Nothing is popularly held to be better than a dry martini, but worse than sand in the bedsheets. A poor man has it, a rich man needs it, and if you eat it for a long time, it'll kill you. On occasion , nothing could be further from the truth, but it is not clear how much further. It can be both black and white all over at the same time. Nothing is impossible for God, yet it is a cinch for the rankest incompetent . No matter what pair of contradictory properties you choose, nothing seems capable of embodying them. From this it might be concluded that nothing is mysterious . But that would only mean that everything is obvious-- including,
presumably, nothing.

That, perhaps, is why the world abounds with people who know, understand, and believe in nothing. But beware of speaking blasphemously of nothing, for there are also many bumptious types about-- call them "nullophiles"-- who are fond of declaring that, to them, nothing is sacred.

Science is a differential equation. Religion is a boundary condition.

Our own universe is not very symmetrical on a small scale—look at what a mess your living room is!

Kick at the rock, Sam Johnson, break your bones: / But cloudy, cloudy is the stuff of stones.

I kind of like this skull I made for the 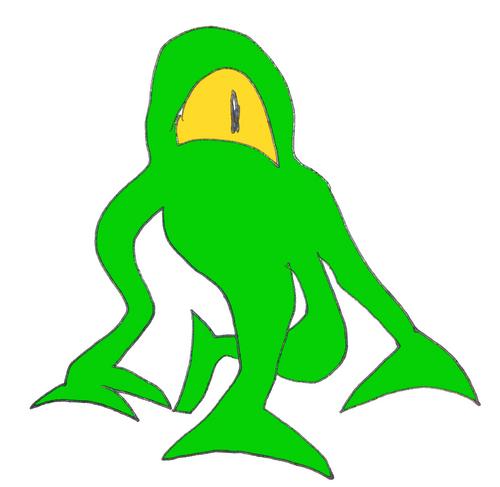 There is no human society without some musical tradition. Although the traditions are very different, some principles can be found everywhere. For example, musical sounds are always closer to pure sound than to noise. The equivalence between octaves and the privileged role of particular intervals like fifths and fourths are consequences of the organization of the cortex. To exaggerate a little, what you get from musical sounds are super-vowels (the pure frequencies as opposed to the mixed ones that define ordinary vowels) and pure consonants (produced by rhythmic instruments and the attack of most instruments). These properties make music an intensified form of sound experience from which the cortex receives purified and therefore intense doses of what usually activates it. So music is not really a direct product of our dispositions but a cultural product that is particularly successful because it activates some of our capacities in a particularly intense way.

(he goes on to say we do the same thing with colors, filling our environments with pure and "unnatural" saturated colors.)
remember there is a totally scary skeleton inside you right now

I simply can't resist a cat, particularly a purring one. They are the cleanest, cunningest, and most intelligent things I know, outside of the girl you love, of course.

from this is why i don't guess

For under $300 I got a 5 yr old refurb Thinkpad X41 from Microcenter... weird to see 4:3 screen again! No "windows" key, but kinda awesome pen on screen tablet. Man, I'm such a sucker for touchscreens. 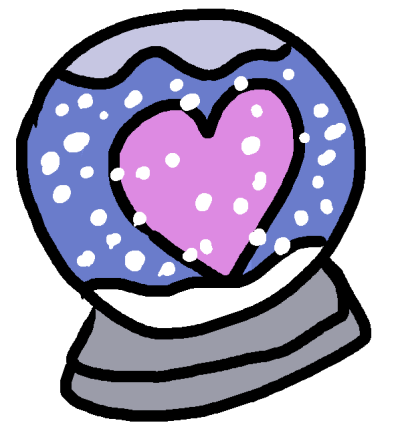 --It's tough to think of a new heart doodle for the Love Blender every month, but Amber suggested a snow globe (after a snowflake, which didn't work out so well. And after a snowbank which would have been really tough to make heart-ish.) She also pointed out the snow bits in the thing shouldn't have an outline. Deluxe Town Diner has a lovely train station companion in Newton Centre; only place I know to get, say, tall order of pancakes and a sloe gin fizz...

Truth is, everybody is gonna hurt you; you just gotta find the ones worth suffering for.

New Blender of Love Digest is here!
Bad game for the Pats, congrats Jets. Ah well a time to "practice equanimity in success and failure" - which sounds LOSER TALK- and it is - but not untrue. 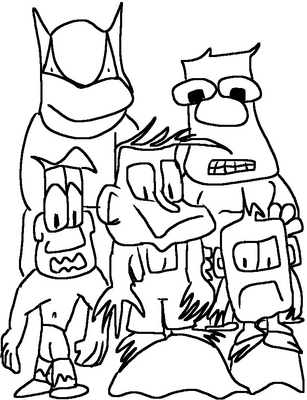 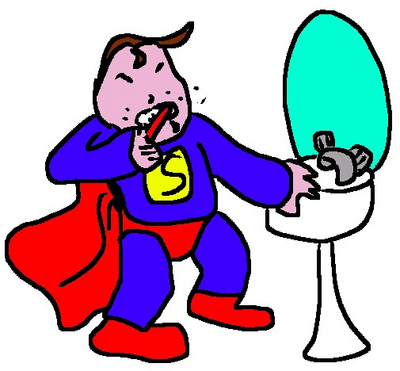 To this day it makes me sad that Outlook thinks a copy and pasted URL should carry font information too. (and why Times New Roman? The browser displayed it in something sans-serif, the default font for my message is Arial...)

Boys and girls in America have such a sad time together; sophistication demands that they submit to sex immediately without proper preliminary talk. Not courting talk - real straight talk about souls, for life is holy and every moment is precious. 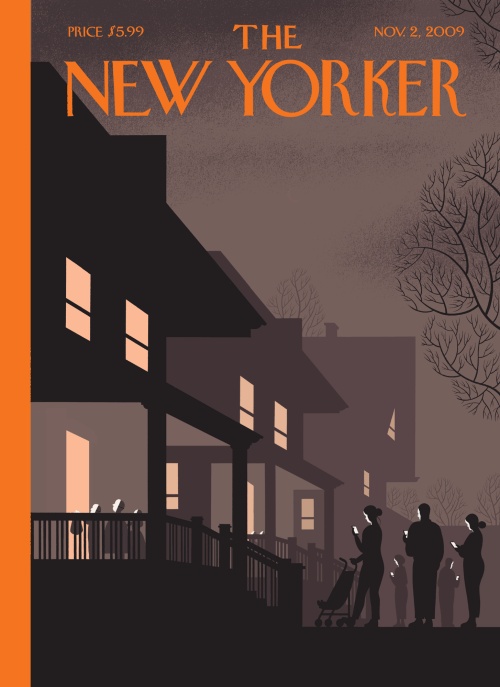 --Love this Chris Ware cover for the New Yorker 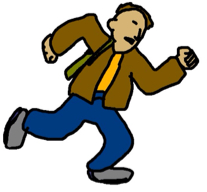 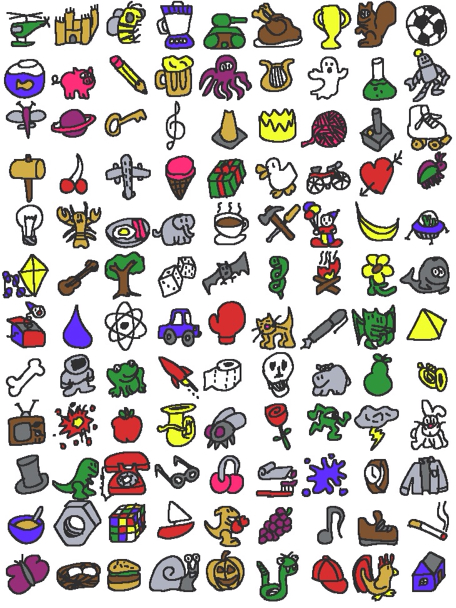 Commissioned by Amber though she might not have realized it at the time.

When I understand that the glass is already broken, every moment with it is precious. 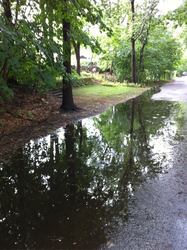 from the angriest animals on the internet

cooldoodle
June 14, 2010
A long while back I got my team at work to continue a tradition of animal-based names, but with "Team Angry Manatee" (I had to use the projector and whiteboard and marker in cannons and lasers to show them just how fearsome an angry manatee could be.) FWIW this site is now the second biggest hit for "Angry Manatee", and it got me wondering... what's the angriest animal on the Internet? I.e. Which animal name gets the most Google hits, proportionally speaking, when you search on "animal name" rather than just "animal"?

The results were a bit surprising... out of the 150 or so names I got off a mildly adulterated Wikipedia List of Animal Names, "Angry Manatee"'s percentage was a lowly .013%, putting it about 2/3 of the way down the list.

So for your edification, I present: 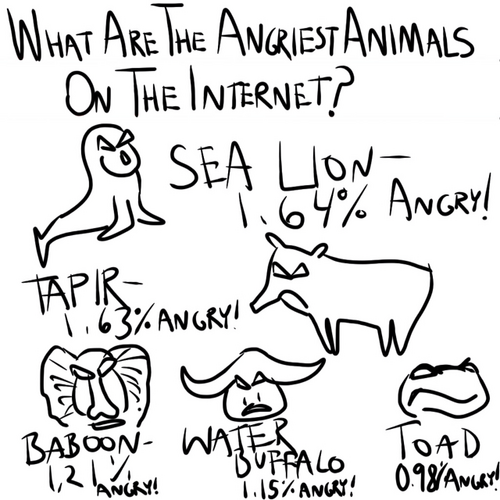 Click to see the raw data!
For the record, the least angry animal was the lyrebird. The Internet had no hits for "angry lyrebird" - at least not until this page gets found by Google.
http://www.slate.com/id/2256250/ - USA "51+ Star Flag" toy shows likely patterns for most state counts from 1-100. Patriotic and geeky!

A cynic is not merely one who reads bitter lessons from the past, he is one who is prematurely disappointed in the future.

With Netflix on Wii upstairs, in HD on Xbox on the basement projector, on laptop or in bed w/ iPad, we can watch Season 2 Office anywheres! (Or once they have the app for iPhone anyway) http://comixed.com/2010/06/12/4-koma-comic-strip-captains-log/ - sorry, but this Star Trek TNG comic made me laugh and laugh... 2019 UPDATE at least I think it was this Pictures for Sad Children:

"Believe me, friendship lasts much longer than love."
"Yeah, but it ain't as much fun."

June Blender of Love is here! 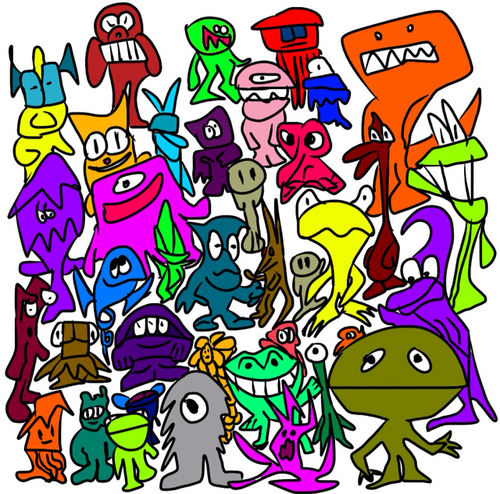 Without that black fold-around slipcover case, the iPad really feels like a big digital photo frame.

[on the possible b-/m-illion typo Dow drop] "Imagine what would have happened if the guy yesterday typed 'zillion'!"

from confessions of an obsessive doodler 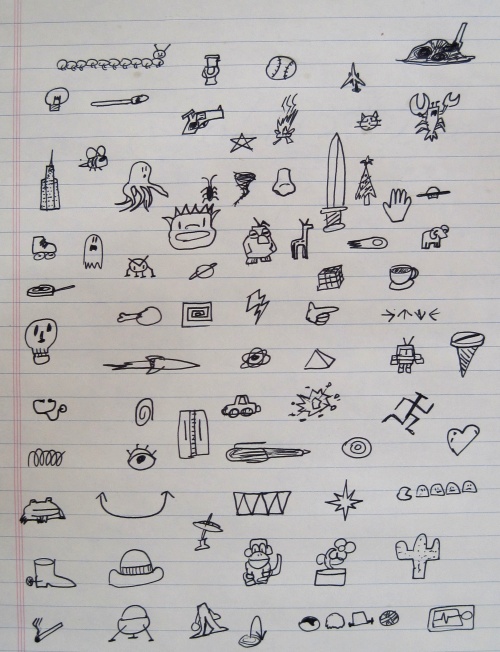 --Not unlike what I did - yikes, five years ago, right down to stylized dracula/wolfman/frankenstein/mummy, though this time I think I'll refrain from annotating every damn one. (Also it didn't scan too too well but I'm pleased with the 3Dness I got in that nose. I really have trouble with adding depth to anything I doodle.)

This reminds me I need to reinvigorate efforts to improve my doodle-upload mojo.

If Scott Joplin could have visited a century into the future, the most shocking part would be his music coming from trucks.

"You're more secure in your masculinity than I thought."
"Like a vault! Of testicles!"

http://samizdat.cc/cyoa/ -- charting those Choose Your Own Adventure Books. Intriguing study in the shared history of many Generations-Whatevers... Super congratulation to my Portuguese host Johnny who just defended her thesis and became a Doctor of Veterinary Medicine! "Get your _____ on" (drink on, smile on, dance on) was to mid-00s what "It's All Good" was to the early-00s.

I am lame too ... been incredibly busy with two kids and all now.

Well, that's it. I like the guy at top right. The Angriest Eggplant is a rehash. "You Make Me Feel Like A Natural Woman" was to amuse Erica during an sQ concert when the guest group was singing that song. As for the breasts...umm...well...I think I was imitating some stylized cartoon I saw somewhere, with the breast drawn with a straightish topside and roundish bottomside (in contrast to the not too inspiring twin hemispheres my unfortunate cartoon women usually end up with.)

Thus endeth the doodles. Been one of the quietest halfweeks on the kisrael comments section, so I'm gonna count this run as "not so inpspring".

--I created this page of doodles during a company-wide business meeting...I recommend the technique of filling an entire page with small, non-repetitive doodles, it's very satisfying. Just to make my self-obsessive-geekness complete, I made it into an imagemap...hover the mouse over any doodle to find out what it is, or use the tab key to tab through each as a link and see its description in the status bar. (only tested in MSIE)

Webcomic of the Moment
Peterman introduced me to the webcomic Full Front Nerdity...3 guys (and a webcam) around a D+D table. I don't know if I'm ashamed or proud to say I've never actually role-played. Still, I read the books enough to understand this one and if you're in a hurry just check out this other one that ends with a potentially reusable "zinger".

Related Joke of the Moment


A fifth-level paladin drives his car to the repair shop.

He gets out and says to the mechanic "It's really weird. Normally I fight for justice and righteousness, but every time I get in this car I have this incredible urge to run over old ladies, drive way past the speed limit, and pick up hitchhiking demons. Can you help me?"

The machanic looks the car over and says "Yeah, I see what the problem is. Your alignment's off."

Explanation of the Moment
For the unitiated: both the first "this one" cartoon link and the joke deal with D+D's concept of "alignment". See this definition of the concept for an explanation.